Paranormal adventure on the streets of Baltimore

Something evil is stalking the streets of Baltimore, our only hope is the new Keeper of the Tether – Sarah Taylor. The only problem, she doesn’t want it and her only guide to this new world she has stumbled into is CT, the Grandson of the original Keeper, who really wants the Tether back with his family and Sarah is quite happy to give it back – if the Tether actually lets her remove it. 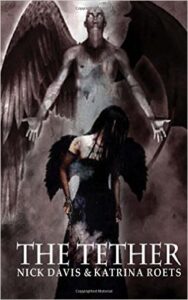 If that wasn’t a problem enough; Sarah and CT find themselves being hunted by a Demon, a Psychotic Killer and a Shadowy Society; all wanting the power of the Tether for their own nefarious plans, and they will murder Sarah and anyone who stands with her for it. At least Sarah can summon an Angelic Guardian for protection, if she can only figure out how to make that happen and use the power locked in the Tether to help her.

Watch the shadows as the battle for our reality is only just beginning… Set against the real backdrop of Baltimore city this urban paranormal action adventure by Nick Davis & Katrina Roets – follows Sarah through a helter-skelter, one night journey into a reality that is disturbingly familiar, but has an unnatural evil stalking its shadows. 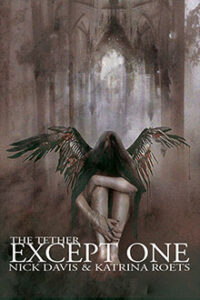 The Tether: Except One | By Nick Davis & Katrina Roets

A monster is on the rampage, a bond of trust is shattered and headless corpses turn up on the streets of Baltimore.

It has been two months since Sarah defeated the Dark, and she just wants everything to return to normal and enjoy her last year of High School. Normal though, is not the life of a Tether Keeper: even one as reluctant as Sarah.

Persuaded by CT to help in an investigation that shatters their friendship. Sarah once again finds herself alone and completely out of her depth. Lulled by the seemingly benign leadership of the Vigilie, she turns to the Custodiet for help.

Meanwhile, a creature of the night long thought extinct comes to Baltimore, and rumors of vampires fill the city with fear as the streets wash with blood.

Except One, the second book in the Tether Saga by Nick Davis and Katrina Roets continues the adventures of Sarah Taylor as she tries to survive a perilous dark supernatural world, that exists in the shadows of our own.

Nick Davis is an Englishman currently living on the East Coast of the USA not too far removed from Charm City (aka Baltimore). When Nick can be found plodding away on a keyboard exploring the worlds of his imagination that takes our reality and twists it around just a couple of degrees…

Katrina Roets has spent her entire life dreaming of writing something that people might read. This Michigan grown girl is reclaiming herself and finding her words again. You know, in between running them everywhere, helping them with homework, teaching them life skills, and all that good mom stuff.

Like Loading...
Copyright © Alt World Studios 2021. All Rights Reserved
We use cookies on our website to give you the most relevant experience by remembering your preferences and repeat visits. By clicking “Accept”, you consent to the use of ALL the cookies.
Do not sell my personal information.
Cookie settingsACCEPT
Manage consent

This website uses cookies to improve your experience while you navigate through the website. Out of these, the cookies that are categorized as necessary are stored on your browser as they are essential for the working of basic functionalities of the website. We also use third-party cookies that help us analyze and understand how you use this website. These cookies will be stored in your browser only with your consent. You also have the option to opt-out of these cookies. But opting out of some of these cookies may affect your browsing experience.
Necessary Always Enabled

Any cookies that may not be particularly necessary for the website to function and is used specifically to collect user personal data via analytics, ads, other embedded contents are termed as non-necessary cookies. It is mandatory to procure user consent prior to running these cookies on your website.