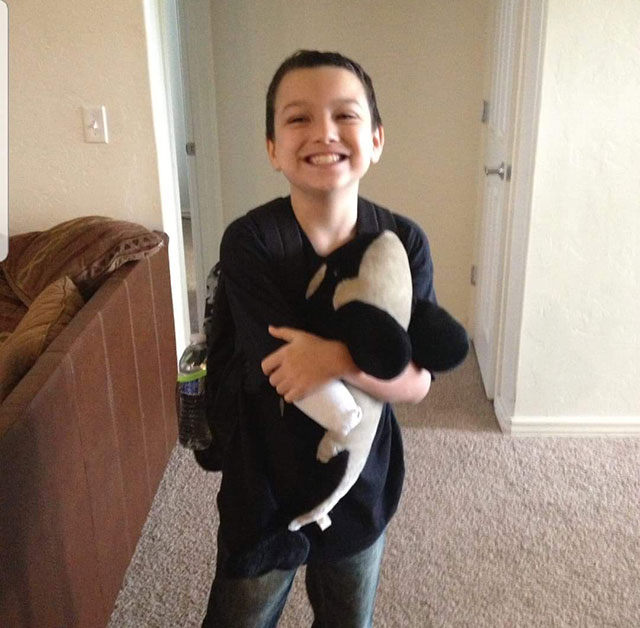 In 2012 I wrote a silly story about a Teddy Bear who defended his child against the Monsters under the bed. I called it A Teddy Bear Tale and had the story illustrated by local Maryland Artist Dan Nokes

The story to my great surprise managed to touch some lives. I heard stories from parents how the book helped their child sleep with the lights off, or how Tristan, or one of his fellow Cuddly Defenders helped their child get over their general anxiety. Today, from his Mother I learned the bittersweet story of Nathaniel. Below is my video reaction at the time of learning the news and sharing it with fans of A Teddy Bear Tale and you can read the corresponding news article here in the local newspaper, The Avenue News.

In 2013 Nathaniel turned nine years old, like every kid his age, he was rambunctious, full of energy and life. He also had a favorite cuddly toy, an Orca (God Of The Sea) that he slept with every night. Sadly, also in 2013 he was diagnosed with cancer and lost part of his right arm to the disease.

His father found a picture of Tristan the Teddy Bear defending his child from the Monsters under the bed online, he brought the book and it soon became a family favorite, giving Nathaniel the peace and courage he needed, and with his Orca watching over him, he slept better at night. Unfortunately, the cancer was too much for his young body and Nathaniel passed away on Christmas Eve of that year, of which I send my deepest condolences.

His Mother wanted to let me know the joy my silly story gave him, how it helped him and the memories it gave them as a family as it was read to him. I don’t know what to really say to that, except thank you. They recently brought the story again to share with their Daughter and re-live the memories it gave them. I am truly humbled by their story, and very happy it brought them joy at a very dark time.

I am blown away over the power my story had for this family, and the comfort it gave them. I don’t call myself a great writer, certainly could never walk in the same light as Neil Gaiman, or Sir Terry Prachett, and the book in question hardly broke any sales records. But, it showed me the power of stories and for that I am grateful I have that gift to tell them.

In tribute to Nathaniel, Nick Davis is now working on a new story called the Dream Warriors, about a child who has cancer, who finds himself in the Dreamscape and ends up protecting other children’s dreams from the Dark, the nightmare shades of the Boogeyman. Learn more about the Dream Warriors Here.

Editor Note – During the month of September 2018 Alt World Studios ran a special sale and all net proceeds from A Teddy Bear Tale was donated to the National Childhood Cancer Society in memory of Nathaniel. During this month we raised $328, thank you all for your kindness.