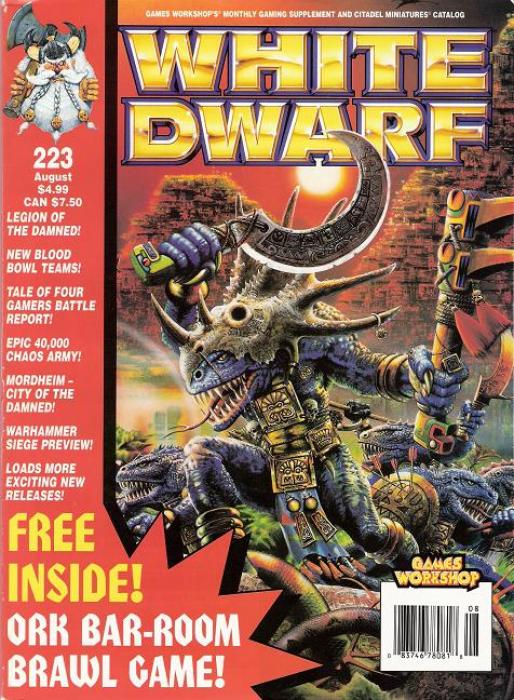 I know I’m really out of the loop on this, but I’ve recently learned that White Dwarf Magazine, the long-lived and storied Games Workshop in-house hobby magazine had seen its last days of publication.

Or from what I can gather is morphing into a weekly Visions book that will concentrate on Warhammer Fantasy Battle (WHFB), Warhammer 40,000 (WH40K) and Lord of the Rings Strategy Games (LOTRSG) as separate books. The collective hobby magazine that held the hobby together as a community was now redundant. I feel very sad about this, the White Dwarf era was over.

You see, I used to write and do production work for White Dwarf magazine during the Paul Sawyer era. Known to many old-school Games Workshop (GW) Hobbyists as the golden years. The White Dwarf years of my life that were truly a remarkable journey.

I got to work on White Dwarf!

Why is that important?

Let me tell you why.

The first White Dwarf I ever picked up was No 96 from WH Smith in my home town Melton Mowbray. I still remember reading that first magazine cover to cover, pouring over the pictures and starting my journey into the Games Workshop hobby, (what was this mysterious drybrushing technique?) I was entranced.

Prior to finding White Dwarf, I just read Lord Of The Rings for the first time. Inspired by these books I began exploring fantasy gaming like Dungeons & Dragons (D&D) and played my first game of Warhammer Fantasy Battle 2nd Edition. Seeing the fantasy world I just read come to life, and the game I played expand into this huge world beyond the boundaries of my small town blew my mind. This was a world I wanted to become part of it. I even said after reading White Dwarf for the first time I would one day write for White Dwarf Magazine and work for this rather marvelous mythical place called Games Workshop.

And It Finally Happened

Fast forward a several years, and I find myself working in the Games Workshop Studio in the Game Production Department, after a convoluted route through the GW Mail Order Depart (the Trollz). We were wrapping up the work on WH40K 3rd Edition, and at the time I was building a Lizardman army (5th Edition WHFB). To accompany this army I built a number of scenery pieces out of cardboard, garden wire and other leftovers you would find in the garbage like beer bottle tops. The editor of White Dwarf, Paul Sawyer saw this and asked if I wanted to submit an article to the White Dwarf talking about how I built this terrain. Without even thinking I said yes, (you can read the article here.) I wrote the article, took the pictures, did the layout work all in my spare time and was completely freaking out when I handed it to the Legendary Fat Bloke. To my complete surprise he accepted it and it was set to be published in the White Dwarf Edition that was highlighting the release of Lizardman army.

After the Lizardman terrain article was published I was tapped to start working on White Dwarf Magazine full time. I filled an odd production/contributor/assistant role, meaning I did a lot of layout work for the magazine (for my entire tenure at White Dwarf the Mail Order section was laid out by me), wrote articles and features and even passed the magazine on press.. It was a surreal experience joining Paul Sawyer’s White Dwarf team – I had fulfilled a life long dream.

Taking A Swing At It

Dream or not, it was unfamiliar ground for me. I had never written for professional publications, (for any publication for that matter), the most I managed was small blurbs here and there and the learning curve for me was huge. Don’t get me wrong,  I am a trained Graphic Designer, and up to that point had worked in the design studio on boxed packaging and games design for a couple of years, layout work didn’t daunt me. But, writing about the hobby I loved at the level worthy of White Dwarf publication, I didn’t know if I could do it, (many would say I still don’t have that talent). I was frankly scared to death I would be seen as a fraud every time I pitched or submitted an article for publication.

I kept swinging at it, taking assignments, pitching ideas. taking the a lot of hits for my writing, some needlessly cruel, and making our copy Editor cry as he molded my mangled English into something that could be read. A thankless task I constantly thanked him for, even if he didn’t realize it. I really did try to make my prose make sense Wordy. I really did!

Did I Do Good?

I like to think during my time with White Dwarf I managed to show the Gaming Hobby at a everyday hobbyist level, and that I brought some joy and a level access into the gaming hobby that was never tried before. I honestly tried to write like I was having a conversation about what I was doing, and wanted to destroy some of the mystery (like what really was drybrushing) and just how easy it could be to make terrain out of everyday household junk) and unlocked the mysteries of how to paint a toy soldier. My philosophy was simple if I, the layman hobbyists could do these things, then anyone could, and I would show you how! I was given the honor and privilege to work on a magazine that touched thousands upon thousands of Table Top Gamers, in what is considered now the Golden Age for White Dwarf Magazine (and maybe for Games Workshop too.)

It was also the Golden Age for me too, one of my career highlights was having White Dwarf 229 (Dark Eldar Edition) almost completely laid out, written and published by me (the entire White Dwarf team was on vacation). Working on White Dwarf started me on a road of adventure; without that spur I never would have had the courage to write the stories that I do now. Thanks to Paul Sawyer’s ‘just do it’ approach, I was pushed way out of my comfortzone to find my own words and I thank him for that (yeah, Paul, if you ever read this I said thank you)

In 2000 I met a girl from the USA, fell in love, left Games Workshop and moved to the USA; and found a job in the US GW Studio Web Department, eventually finding myself again working on White Dwarf magazine – US Edition. This new publishing adventure ended on a sour note, in fact my last White Dwarf article was for the USA version (a terrain article) and was published back in 2004 just after I was ‘let go’.

The article was part of a series of LOTRSG articles talking about terrain building (Siege Works), coupled with a series of basic painting articles (Darkness & Light) and a suggested rule article called All At Sea – including an article how to build a ship for the game out of craft sticks. My proudest achievement of the time was Warbands, a rule set that was used for Official USA Games Workshop Tournament play for the LOTRSG, based off rules I developed for lunchtime gaming at the USA Games Workshop Studio – because no one there ever played the games.

For the life of me I cannot remember the issues the articles appeared in and I am pretty certain none of them appeared in the UK version of White Dwarf. Although my time with Games Workshop ended extremely poorly, my time writing/working on their magazine allowed me to fulfill just one more dream. I got to write something related to Lord of the Rings – the amazing set of books that started my journey into fantasy gaming before I ever picked up White Dwarf 96 – things had come full circle.

So long White Dwarf,  I thank you for everything.

You can view my tabletop gaming writers portfolio here