The cartooning home of Nick Davis, writer and artist
Menu 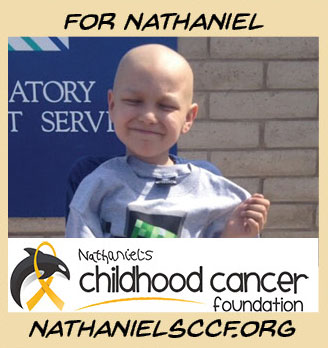 For the month of September, for every Dream Warrior book preordered, we will donate half the royalties earned with each sale to the Nathaniel’s Childhood Cancer Foundation.

Nick Davis, an author, and illustrator based in Orrstown, PA and never thought that his “silly” story about a teddy bear could ever be anything more than a fun adventure illustrate book. Over the years, Nick would hear from parents about how his books would help their kids sleep with the nights off or get over a ‘fear’ such as going to the Dentist, because their cuddly toy would look after them if there is any danger.

Then Nick learned about Nathaniel and his struggle against bone cancer, after his mother Christine reached out to him over Facebook. Through their conversation Nick found out how much his ‘silly’ adventure stories impacted their child’s short life. Nathanial, a nine-year-old boy battling bone cancer in Arizona read Nick Davis’ night guardian adventure stories and they became a source of comfort, inspiration, and strength for Nathaniel, and he began to believe his cuddly toy was watching over him and protecting him as he battled cancer and dealt with the fear and anxiety of his journey.

Davis wrote “A Teddy Bear Tale” in 2012. The story focused on Tristan, a teddy bear, and his group of Cuddly Defenders that helped protect their owners from the monsters under the bed and the critters that go bump in the night. “I am truly humbled by their story, and very happy it brought them joy at a very dark time,” said Nick Davis. “His mother wanted to let me know the joy my silly story gave him, how it helped him and the memories it gave them as a family as it was read to him. I don’t know what to really say to that, except thank you,” said Davis. “I felt hollow saying ‘thank you’”

Sadly, Nathaniel, despite a brave fight, passed away in 2013. But Davis said he will keep his memory alive and in this latest story, Dream Warriors, he will be using the preorders of the graphic novel to give back during September, which is Childhood Cancer Awareness Month.

“After hearing this story, which is just so bittersweet, and learning about this family and all they’ve been through, I thought, “What else could I do? There has to be something more I can do.’ said Nick Davis

For every preorder of the Dream Warriors sold during September, Nick will split the royalties and donate half to Nathaniel’s Childhood Cancer Organization to help more children who are battling this disease.

Based in Orrstown, Davis came to Pennsylvania from England over a three years ago, via Maryland.

As a writer, he said, you never truly know or can predict who will read your words and how it will impact them, and the story of Nathaniel proves that.

The Dream Warriors by Nick Davis, art by Veronica Smith will be released on October 31, 2022, you can pre-oder the book at http://dreamwarriors.rocks

About Nick Davis – Nick Davis is an Englishman in the USA, the writer and occasional artist of the Night Guardians, the ongoing adventures of heroic kids and cuddly toys who bump back against the bumps in the night and their master, the Boogeyman. Learn more at http://nickdavis.rocks

About Dream Warriors – This is a whole new adventure graphic novel set in the world of the Night Guardians, where Thomas, a cancer-ridden child who dreams of being a Knight of old, Nate his teddy bear spirit guide and Marcy, a whip-smart girl, explore and protect the realm of dreams from the Dark, the nightmare of the Boogeyman. The Dream Warriors is an adventure graphic novel that is coming October 31 and is available for preorder on Barnes & Noble. A bittersweet fantasy adventure, which explores a quite different part of the Teddy ‘verse and a story inspired by the courage of hospitalized children everywhere. Learn more at http://dreamwarriors.rocks

About Nathaniel’s Childhood Cancer Organization – On the sad passing of Nathaniel, his parents formed the Nathaniel Childhood Cancer Foundation (NCCF), to bring joy to other children’s hospital rooms. The NCCF focuses on providing children battling cancer with care packages, aka Warrior Packs. These are not ordinary activity packs! These packs provide extraordinary items to these brave children like gaming systems, toys, books, electronics and more. Learn more at https://www.nathanielsccf.org/

This website uses cookies to improve your experience while you navigate through the website. Out of these, the cookies that are categorized as necessary are stored on your browser as they are essential for the working of basic functionalities of the website. We also use third-party cookies that help us analyze and understand how you use this website. These cookies will be stored in your browser only with your consent. You also have the option to opt-out of these cookies. But opting out of some of these cookies may affect your browsing experience.
Necessary Always Enabled
Necessary cookies are absolutely essential for the website to function properly. This category only includes cookies that ensures basic functionalities and security features of the website. These cookies do not store any personal information.
Non-necessary
Any cookies that may not be particularly necessary for the website to function and is used specifically to collect user personal data via analytics, ads, other embedded contents are termed as non-necessary cookies. It is mandatory to procure user consent prior to running these cookies on your website.
SAVE & ACCEPT
%d bloggers like this: